This page provides you with the opportunity to view past Art Shows to get a feel of how our events are layed out. Enjoy. 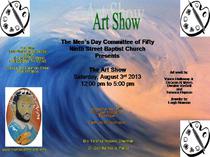 One of the very first Art Shows that MTMHA produced was held at Fifty Ninth Street Baptist Church. The date was August 3, 2013.  The event was implemented as a prelude to the Church's Men's Day Celebration, which took place the following month. Terence Hopson was Chairperson of Men's Day that year and this Art Show fit right in.  It was a huge success. 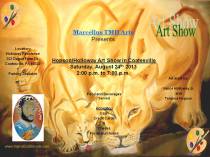 Three weeks later after the Church Art show, MTMHA decided to go to Coatesville PA, and have a show at the Holloway Residence.  This show holds a record of being the most successful show in a house venue.  Truth be told, Terence wanted to have the Coatesville show on August 3rd, but due to a scheduling issue, that date wasn't available and it was pushed out to August 24, 2013. Determined to keep the date of August 3rd, Terence consulted with his MD committee to have an Art show on August 3rd at Fifty Ninth Street Baptist Church.  Having two Art shows in the same month is rare, but not unlikely. 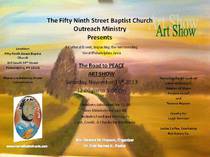 As MTMHA continued to grow, it was requested that an encore Art Show should be held at Fifty Ninth Street Baptist Church once again. However, returning to the same venue three months later in November of 2013, proved to be challenging.  Nevertheless, it was a good show and a learning experience.  This show took place on November 16, 2013.