Here's what people are saying about Marcellus TMH Arts.

"Terence Hopson is a phenomenal artist that brings life and character to his marvelous paintings.  The artistic skills, patients, and thoughts he puts into one masterpiece is unbelievably remarkable. My wolf pack painting he has done for me brightens and brings so much more character to my room than anything else.  The features and motion of how he captured my favorite animal makes me love them even more.  I am very satisfied with the outcome of my painting.  "

"Hello Art fans, my name is Jeff Dixon (Designer/Handyman), I have known Terrence for many years now and knew of some of his passion like his love for reptiles, his almost unbeatable bowling skills and his amazing model train/tolley set, which he deisigned and build from scratch.  I would also see some paintings here and there, but never thought they were his work, they looked like they were purchased at a store.  I knew Terrence could draw because of a poster he made for his sales team some years ago at Sears CCN, which was done to perfection.  In reference to the work he did on that poster, I asked Terrence if he went to any type of Art School.  When he said no, I kinda found it hard to believe.  He made a believer in the summer of 2012.  I was renovating his basement last summer (2012) when he came and got some white canvases from a box he had stored away.  I asked him what they were for and he said a couple of friends asked him to do a few paintings for them.  He then went upstairs to his dinning room and got to work.  After about 15 minutes or so, I went upstairs to have a drink of watwer and to my surprise that white canvas was now a huge Tiger.  I was at a loss for words, all I could hear myself say was,..."Oh S@#%, where the hell this come from"...I even looked around to see if it was something he was trying to copy, or if he freeze framed the animal planet on cable and copying a tiger.  When I didn't see anything and actually saw Terrence dipping the brush into the paint and started creating the background of the painting, I was truly amazed.  I asked him how did he just make a damn tiger appear out of nothing.  He smiled and said,..."the same way you can visualize what needs to be done to make my basement beautiful is the same way I can make a blank canvas beautiful"... That's T hop for ya" 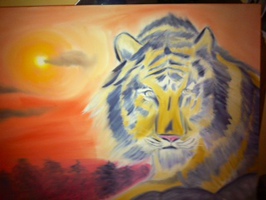 The Tiger Jeff Dixon spoke of in his testimonial. Horizon Tiger

"I'm thankful to Terence for presenting this Joker Painting as a Birthday gift. I love it very much and had it framed one week later." 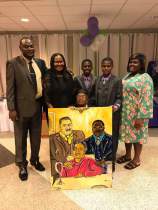 "...My Aunt cried tears of Joy when she was presented with the painting.  Thank You So Much!..." 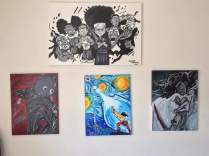 Terence my collections is looking good brotha, maybe 2 or 3 more to cover my wall.  Hit him up  if you want one!

"The picture does this painting no justice.  It is absolutely beautiful!  I showed Terence what I wanted and he brought it to LIFE!  Amazing!"

"To GOD be the Glory, I am the number one Eagles Fan.  Thanks my brother in Christ" 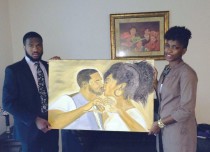 "Speechless. All we can say is Thank You so much."

"I love this print of art of survival I also have a print of the Lion brothers.  True talent is here"

"This was the first painting Terence made for me and I love it.  I also receive his magazine.  He is truly blessed with talent" 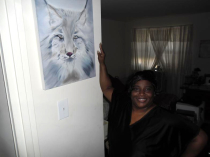 "I'd like to take a moment to attest to the professionalism I have received, for close to two years, from Mr. Hopson.  Professionalism on a level that far exceeds your expectations.  Allow me to explain.  Close to two years ago in 2009, I was in the presence of Mr. Hopson when he happened to be on his Facebook page.  I glanced over him and saw a picture, or what I thought was a picture of a Lynx.  I began to inquired about the picture and found out it was actually a painting that Mr. Hopson himself had painted.  A beautiful vibrant colored painting that I fell in love with immediately. He told me the painting was home and I said, I WANT IT!  HOW MUCH?  He said sis calm down!  But I was just speechless at the quality of his work.  I would highly recommend Mr. Hopson for any of your artistic needs and would be certain that he will provide you the same excellent service he has provided me. "