Marcellus TMH Arts was founded by Terence M. Hopson in 2008. He turned his love for freehand drawing to canvas paintings using the medium of Acrylic and Oil.

Terence M. Hopson, a Philadelphia native, is the son of Gloria J. Hopson and the late David Hopson Sr. (49).  His father, David, served in the US Armed Forces in the early 1960's. Terence is the 3rd born child to Gloria and David Sr.

At the age of 3, Terence was amazed with the Muppet Characters from the long-running children show Sesame Street.  Terence started sketching these characters (especially Big Bird) at the age of 5.  His first drawing of Big Bird rarley left his side.  One day, strong winds caused the drawing to blow across a very busy Girard Avenue in West Philadelphia.  He ventured desperately into busy traffic to recover it (and promptly received tough love from sister, Trudy... and later from Mom Gloria).

As Terence grew older, he started drawing cartoon characters from the early 80's: Pac-Man, The Smurfs, He-Man, Transformers, GI Joe, and Dinosaucers, among others.

Terence's love for drawing was well-known by schoolmates throughout his youth and young adulthood.  In fact, while attending Philadelphia Christian Academy (P.C.A), his 5th and 6th grade teacher, the late Mrs. L. Carter, would always ask him to draw something for classroom decoration.  During his early professional career with Sears CCN, his artwork was always appreciated and encouraged.

His mother, Gloria, wanted him to attend art school, but Terence preferred sketching to physical art, which was more emphasized institutionally.

In 2008, he started using oil paints to create nature and abstract art.  It had become more apparent than ever that painting was his true calling.  He now uses oil and acrylic paints as part of his repertoire.

A memorial portrait will be created soon by Terence in honor of his late brother David Jr "Buster" (47), who we lost in early 2016. 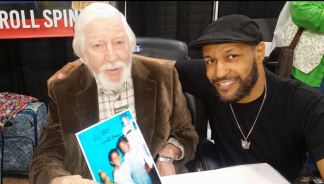 Terence with the man behind the voice and feathers of Big Bird; Caroll Spinney. 2018

"...I started drawing pictures of Big Bird when I was 5 years old and having this opportunity to meet the man who brought my favorite SS character to life, was an honor..."

MTMHA first started with a website that was very plain, but due to excessive growth in technology and competition, it was time to upgrade to a more up-to-date site that would attract all viewers. The previous site lasted from 2009 to 2016.  "...YES IT WAS TIME..."